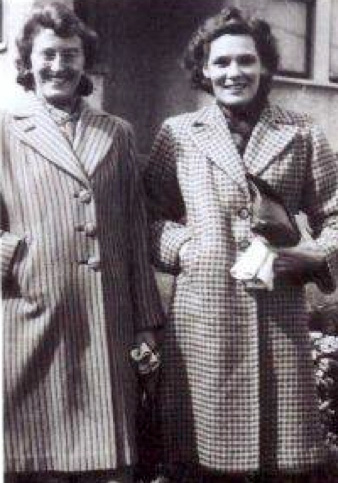 On October, 2010, the BC Wests lost the last sibling of John and Emma’s family.  Edna was born in Lloydminster  Saskatchewan on July 28, 1910, the 4th of 8 children.  The family moved to Vancouver in 1919, where she received most of her education.   She attended Normal School in Vancouver the late 1920s.  This is where she met her life-long friend, Betty Turnbull.

Normal school education was equivalent to a university certificate, but jobs were easier to find without a certificate during the depression since pay-scales were much lower.  Edna was a substitute teacher at various Vancouver schools prior to full time teaching children at the Vancouver Preventorium.  Built in 1932, it was a TB hospital school for children, which housed children with tuberculosis.

Edna and Betty summered in Grantham’s Landing at their Elphinstone Road ‘camp’ from the 40’s .  In those days they took a steam ship or, when weather permitted, they travelled from False Creek in  Grandpa John’s 14 foot clinker-built boat.Edna had a very active/exciting life, hiking with Betty: backpacks, groceries and all, to their cabin on Hollyburn Mountain, year after year.  She skied, rode horse back and enjoyed many sports. They travelled to many parts of the world before air-travel became common.  In the 1940s, and in many subsequent years, they drove in a truck with a camper through Mexico. In 1984, they had a wonderful cruise ‘around the World, walking on the Great Wall of China.  Edna kept in touch with family & friends with post cards wherever she went and of course regularly visited family & friends when she was home.

In the 1950s she & Betty purchased their  Grantham’s Landing waterfront home, sold to Ann  in 2000 when they retired to Gibsons Garden Inn at age 90.  Alas, friend Betty died soon after their move from their beloved home.  Edna moved to Christensen Village (assisted living) when it opened in 2005.  She enjoyed all the staff and greatly appreciated the care they gave.  She became very good friends with many.  Edna may have been in a wheel chair and blind, but she certainly could ‘see’ all the good things people did .  When she was able to attend the yearly “Kuzzins” picnic,  she amazed everyone by her knowledge of the names of all the children, no matter how young. She was generous and kind & loved all of us.

We “Kuzzins” will remember the exciting summer visits to Grantham’s and wonderful times with her and with Betty.  We will all miss her and hold her in loving memory.