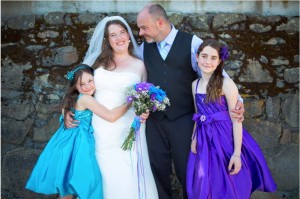 We are happy to announce the commitment ceremony of our daughter Alexis to Eric Lamontagne on September 1.  The ceremony was held on the beach at Sunrise Point, and the reception was at Morehaven, our Thetis Island summer home.

Their union is more of a “reunion” with a fairy-tale ending, as they first met and were girlfriend / boyfriend in their early teens.  For more than twenty years, they lived their separate lives but were re-united in 2012 over the internet by a mutual best friend from their teen years: Gabrielle Warr.

Alexis is now back in Victoria with Eric and his daughters (Anna – 10 and Abigail – 8).  Living in Langford,  Alexis teaches at the Sunrise Waldorf School in Duncan and Eric is a sound engineer, working on movies and tv series in Vancouver and on the Island.  We see them every week now (darn!)