Excerpts from “The Conductor is the one in Front” – Bruce More

2000 – This was the year that our Transylvanian (Romanian of Hungarian ancestry) “mature student” Mihály Péter joined the Chamber Singers. At 11 pm the “revellers” assembled dutifully in the cabin, and sometime during the evening Mihály told the full story of his life, which included: jobs as organist in the Ditrau & Brasov cathedrals; his  ight from the Romanian Ceausescu regime to  nd a new life for his family; his time in Toronto which included a near-death car accident with memory loss and a year of recovery at which time he lost contact with his family; plus his move to Victoria in the mid ‘90s and his subsequent decision to continue his studies at the School of Music.

His story had a potentially happy ending when he told us that he had located his family (wife, daughter and son) and was planning to go home to visit them at Christmas time. Needless to say this was a more tearful than revelling evening for those present.

Related note: After graduation, Mihály went home to Oradea, and he subse- quently studied for 2 years at the Vatican School of Church Music in Rome. He organized two concert tours for us in Romania: one for Prima Youth Choir in 2004 and another for the Chamber Singers in 2007. He remarried in 2003 to Emese, a wonderful fellow musician. Life in Romania was very hard, but the commission we paid him for each tour was the equivalent of nearly a year’s salary. I last heard from Mihály in 2009, at which time he described their house that they couldn’t afford to heat and employment that paid next to noth- ing. Funds offered from generous singers helped out for a time, but as hard as I’ve tried, I was not able to re-connect with him until November of 2012. The result of a Google search for his name in Oradea yielded an obituary list that included his name; nothing about him, the date or cause of his death.

Mihály Péter came to us from the Hungarian part of Romania (Transylvania) in 2000 (read his story in the Morehaven Thetis Island Retreat chapter). He was a very special man who, in spite of health problems in the months leading up to the trip, managed to organize a superb visit for us to this exciting part of the world. He travelled with us all the way through Moscow and with only 24 hours notice of a sudden cancellation of host, he arranged for an extra night in Ditrau. While returning to Oradea from Mos- cow and stopping to visit his son near Satu Mare, Mihály was beaten and robbed of the $6,000 fee that we gave him for organizing his portion of the tour. And now he is gone! I hope he took the best of his musical talents, warm personality and great sense of humour to the “heavenly choir”. Rest in peace, my dear friend!

Our  first actual concert stop was in Oradea (Bihor in Hungarian). As in China in 2005, the Chamber Singers headlined an international festival of music, this time centered at the Olosig Basilica, a wonderful Baroque cathedral at which Mihály was one of the organists. Appropriate to the festival, the concert was well covered by TV cameras on booms and with special lighting. Although this professional taping impressed us greatly at the time, it was a sad commentary on the economic dif culties of Romania that no broadcast resulted in the months following. More than a year later, Mihály told me that the TV station had asked him for many hundreds of dollars to broadcast the programme. However, just having the opportunity to sing in this beautiful space was reward enough. Oradea is often described as the “northern Venice” with its canals and fascinating architecture from the Austro-Hungarian Empire era. Historically, Oradea was a mercantile city which had many wealthy merchants competing with each other for spectacular buildings. Today, although a bit run-down in places, the effect is stunning.

In Baie Mare, due to a last minute change, we were hosted by a Presbyterian Church and housed in a dormitory on the church property. We were served Transylvanian- cuisine meals and enjoyed a generous pastor and the “chorally aware” congregation/ audience that we were to  nd as the norm in Transylvania. Although this part of the tour was characterized by a busy schedule of evening concerts, daytime travel to the next venue etc., we very much enjoyed the countryside and the peculiar cultural mix of Roman Catholic, Romanian Orthodox and even some Muslim architecture. One of Ceausescu’s innovations in Romania was an effort to mix the disparate Transylva- nian (Hungarian) and Romanian cultures by moving large Romanian populations into Transylvania from the 1950s onwards, ostensibly to gain a majority vote from the Ro- manian population. In every Transylvanian city we passed through, we saw a Roman Catholic church and a huge new (often un nished) Romanian Orthodox church, which was part of the communist government’s efforts to attract Romanians to these areas.

Our third “day on the road” took us to Stinceni (Gödermesterhaz), Mihály’s family village, where in 2004 we had enjoyed a barbecue of mici (pronounced “meech” – a superb sausage-like preparation of ground lamb and beef) washed down with copious amounts of homemade pálinka (Hungarian “ rewater”). The promise of a repeat of that glorious day held us all in high anticipation. What actually happened was some- what different. We stopped brie y in the village (not at Mihály’s ancestral home) and continued to Toplitsa for a very cozy afternoon concert. The church was small and overheated, but the audience was wonderful. Here, one of our singers who had trav- elled with us in 2004 reunited with a young woman he had met on that trip. It would seem that the reunion was a happy one, since he apparently drove all the next night to go back to see her from Ditrau, and rumour has it that he visited again in 2010. Sadly, Mihály found out that the Toplitsa hosts had “bailed” on us, but happily, he was able to make arrangements with our next host in Ditrau (Ditró in Hungarian) to take us for two nights instead of one.

That evening, we stopped off on the way to Ditrau to enjoy the promised mici and pálinka. It was a strange, almost séance-like event since it was in a mountain cabin that was heated by a wood fire and lit by candles.  It was a wonderful evening of food, drink and song with our hosts from the Ditrau Cathedral Choir. Late that night, we drove on to Ditrau to a municipal residence which was under renovation, but quite comfortable.

The upside of having our accommodation changed was that we now had a day without travel. This gave us an opportunity to relax for a bit and gave our drivers an oppor- tunity to do needed bus maintenance. We had become so accustomed to the forward momentum of the trip that some of us were a bit “at loose ends” because Ditrau is a fairly small community, and we had no means of transportation that day. We also had very little local currency because we had been travelling during the May 1 holiday period and banks had been closed. A visit to our evening concert venue was the main attraction. Ditrau cathedral is a beautiful 19th century structure, proudly built by the villagers with no state or church subsidy. It sits in the middle of a  eld and, like the cathedral at Chartres, can be seen across the plains from many miles away. We enjoyed the tour and organ demonstration (you’ve never really heard the Simpsons theme until you’ve heard Alex M. play it on the Ditrau organ). Mihály had been the organist there in the late 1980s when he made his fateful decision to escape to Canada to attempt to  nd a new life for his family. Our evening concert was everything that the aesthetics and acoustics promised it would be. A full house heavily “laced” with members of our host choir made for a very rewarding performance experience for all of us. Dinner was served after the concert, which always meets with my favour. On the menu was a traditional sauerkraut/pork cabbage roll that we all agreed was sensational. I urged Connie to go into the kitchen and get the recipe, which delighted the volunteer kitchen staff who wrote it out in Hungarian for her. 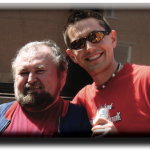 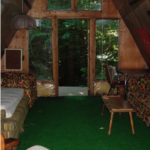 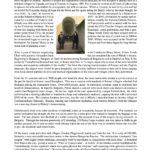 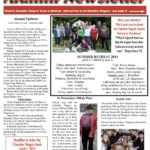 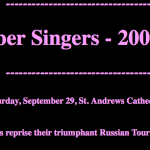 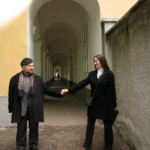 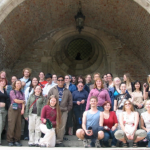 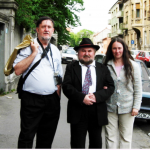 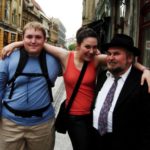 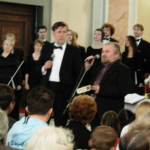 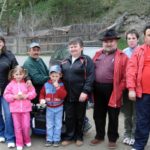 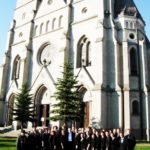 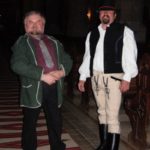 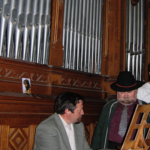 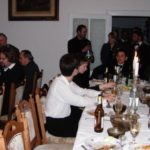 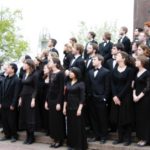 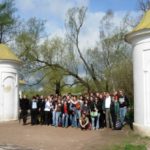 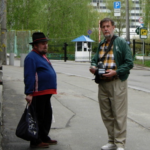 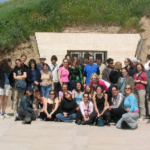