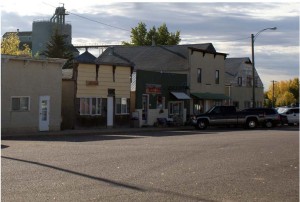 Today, all of Grampa John and Gramma Emma’s grandchildren (the “Kuzzins”)  live in B.C. and Alberta.  Obviously we all find western Canada a superior place to live, but how did it happen?  Why did John and Emma (with infants Jack and Elsie) leave the beauty of rural England to come to what was then the pioneer lands of eastern Alberta?

Why would a young family leave beautiful green England for a relatively desolated plain in the middle of nowhere?  Why they left is fairly clear.  The economic realities of England at the turn of the century can be researched thoroughly by anyone who can read Wikipedia and operate a mouse or track pad. The consolidation of grain mills into larger factories in the late 19th century must have put an end to any of Grampa and Gramma’s dreams for the “good life” in their homeland.

This economic reality converged with the lure of the military, resulting in Grampa going off to fight in the Boer war.  Add to that the great interest in the gold rush amongst Britons, which spawned Grampa’s epic trip to the Western U.S.  This ended with his being shanghaied out of Tacoma and being released 6 months later in Ireland.  The most significant “push” toward emigration, however, was the large effort being made by Canada to attract British families to develop farming land in Saskatchewan and Alberta.

Enter George Exton Lloyd (later Bishop of Saskatchewan). In 1900 he returned to England from a trip to Saskatchewan . In 1902, he wrote a letter to The Times (of London) proposing Western Canada as a good destination for emigration, receiving thousands of replies.  As a result, he became involved in an emigration project with Isaac Montgomery Barr, and he and his family emigrated with the Barr colonists. Although Barr was able to interest more than 2,600 colonists in emigrating, arrangements for their transportation and care were generally insufficient. For example, they crossed the ocean in a former troop carrier designed to hold a maximum of 900 passengers.   In St. John, New Brunswick, Barr disappeared, and Lloyd had to step in and arrange rail transportation to Saskatoon, where Barr turned up again. About 1,500 remaining colonists (the rest had stayed in Manitoba) made the rest of the 275 km trip by wagon and on foot.  By the time they reached Battleford, the colonists’ discontent with Barr came to a head. They asked Lloyd to take over leadership of the colony and eventually named their settlement Lloydminster in his honour.  Barr is of particular interest to the West family because of his interest in Cecil Rhodes’ work in South Africa.  When Barr returned to London in January 1902, he was dismayed at news of Rhodes’ failing health and, two months later, Rhodes died. Barr by now though had first-hand experience with the economic doldrums in England, compounded by thousands of soldiers returning from the War in South Africa with few economic prospects – an apt description of Grampa’s circumstances in these years.  This is clearly the connection of Grampa’s family with the Lloyd/Barr colonists, although they didn’t join the first wave of colonists in 1903, but waited until 1908 before joining the colony.

Gramma, Grampa, Jack and Elsie arrived in Halifax on Mar. 28, 1908,  travelled by train to Edmonton and then later by rail to the Earlie homestead land, neary Kitscoty, AB, near the Saskatchewan border – 20 km  west of Lloydminster and 200 k from Edmonton.

More about the Colony (with thanks to Wikipedia articles):

Lloyd believed that Canada should be populated by British immigrants. In 1898 he wrote a letter to The Globe and Mail stating that the Canadian Pacific Railway was “dumping aliens” into the West, and that government policies should be set restricting the numbers of “non-preferred Europeans”.  In his capacity as a rector and teacher in the West he took pains to ensure that the children of non-British immigrants were encouraged to learn English and to learn about British history.  He also started an initiative within the Anglican diocese of Saskatchewan that there be no distinction between the sexes in the choice of delegates or committee members.  In September 1902, he sailed for Canada to meet with Canadian government officials in Ottawa, and railway executives in Montreal.  He also met with officials of the Elder Dempster shipping lines to arrange ocean transportation. Barr made verbal arrangements with all these individuals for assistance and support. Both the Government of Canada and the shipping lines had incentive programs to promote the much desired settlement, however, many of the commitments Barr received were not carried to complete fruition.

Barr’s plans included the formation of several “syndicates” or co-operatives through which the colonists could purchase transportation equipment, farm machinery and livestock. There was even to be an organization devoted to medical care and hospital coverage after arrival. Such complexities would have presented an organization challenge given the 500 or so settlers Barr initially envisaged. However, he was overwhelmed by the questions, demands, and complaints of over 3,000 eager prospective colonials.  Barr hired George Flamank as secretary, and Christina Helberg as typist to deal with the vast quantity of correspondence.[12] Rev. Lloyd, too, became increasing involved, eventually arranging with the Colonial and Continental Church Society to receive a stipend to act as Chaplain to the group and thus he and his wife and their five children became “Barr Colonists”.

The project continued to mushroom into one of the largest group settlements in Canadian history; attracting attention from the Canadian, British, and even the United States press. The main party, including Barr and Lloyd, sailed on the SS Lake Manitoba from Liverpool on March 31, 1903. Many other colonists came on other ships and this flow continued over a period of several years, thanks to the energy generated by Barr’s idea of an all-British Colony in the middle of the untapped Canadian west. Unfortunately for Barr, many of the colonists were urban and middle class, with little tolerance for the vicissitudes of ocean and rail travel, let alone the life of pioneering farmers.

By the time the ship docked in Saint John, New Brunswick complaints had already surfaced about Barr’s inability to meet the colonials’ expectations. Rev. Lloyd had emerged as a steadying force and contrast to Barr. The growing tension between the two was fueled by Barr’s lifestyle; drinking alcoholic beverages, and a relationship with the young, female typist, both of which offended the prim moral standards of Rev. Lloyd.

Never-the-less the settlement was taking on epic proportions. There were five trainloads of settlers journeying over 4,000 kilometers across Canada, to Saskatoon, then a small village at the end of rail. Then the naive settlers set about purchasing oxen, horses, and wagons to transport their huge quantities of baggage, with everything from fine china to pianos, and travel the remaining 300 kilometers to the townships where homestead lands awaited, reserved for them as a result of Barr’s visit to Ottawa. Colonists continued to blame Barr for the high prices of goods, the harsh weather conditions, and the lack of suitable travel facilities. A meeting of some of the colonists at the midway point of Fort Battleford voted to reject Barr as leader and replace him with Rev. Lloyd.

Contrary to some local Lloydminster lore, Isaac Barr did reach the future site of Lloydminster and, on the morning of May 10, 1903, raised a red ensign he had brought with him, to mark the culmination of his plan. However, facing rejection and criticism, threatened with legal action, or worse, Barr retreated from the adventure. His rejection was even more poignant when, despite some growing pains, the settlement quickly became a success and one of the prime agricultural areas in western Canada and, later, an oil producing center as well. It had, indeed, been a promised land.