A COLLECTION OF NEW FAMILY INFORMATION GAINED FROM OUR VISIT IN OCTOBER, 2012.  (OTHER SUBMISSIONS WELCOME!)

1. Daniel West (b. 1856) was injured by a Great Western Railway train and was in court several times seeking redress from the railroad.  This is perhaps the court case in which his brother William Westell West participated against the railway – though it was more likely pertaining to the lost land of his mother Jane in Steventon. (Dan Pepler)

2. Charlie West, son of Daniel (above) emigrated to Canada, running the marina at Maple Bay, B.C. for a time before dying in the Veteran’s hospital in Victoria in the early 80’s.  He is described as a very independent young man who left home early in his life, returning home to collect his inheritance and going right back to Canada, losing the inheritance in a very short time. (Dan Pepler)

3. Heber West proposed to Mercy Smith sometime after 1915, asking her to come with him to Canada.  She refused.  (Helen Willemsen)

4. Here’s a newspaper article that finally answers some of the many questions surrounding the family story of the shooting at Venn Mill:  September 3, 1892 – The Berkshire Gazette. (Becky Harris) 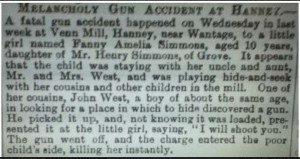